Finally managed to catch Captain America: Civil War. I really enjoyed it and while it didn’t go specifically the comic book route, it managed to capture the darker aspects of being a superhero. The tension between Cap and Iron Man really sold the feelings of seriousness that is rampant throughout the entire story arc. Anyway, since I caught it in the morning, you, my dear friends, went without me. Fret thee not, I am finally here with my promised review. Let’s kick off, shall we?

The Uni Pin Pen was just another drawing pen in the veritable collection that I’ve been testing, it stood out as one of the stronger contenders among the masses. The barrel design is one of my favorite aspects of this pen, as it is seemingly difficult nowadays for companies to make their pens out of plastic, but not make their pens feel cheap in the process. Kuretake did an astounding job with the Zig Cartoonist line, making the barrel smooth and comfortable to hold. Uni has similarly done an amazing and arguably, better job on the Pin. It’s smooth, sleek and the branding is subtle. All in all, one of the most comfortable barrels I’ve handled so far.

The tip is standard fare for a plastic tip drawing pen. I opted for my traditional 03 size, which i this case, is 0.38mm and I wasn’t disappointed by the performance at all. However, I found that the angle of the pen really affected the thickness of the line more than some of the other pens I’ve been testing. Occasionally, my lines would slowly thin out at the end of the stroke, but I didn’t find this to be too much of a problem because I prefer to write in block letters. For those who write exclusively in cursive, this may be something of an issue. The ink is a pigment-based ink that is water-proof and fade-resistant.

The grip is one of the biggest problems for me with this pen. The grip gets too narrow too quickly, resulting in a large width difference between the levels that makes it hard to compensate for. I’m a “low-gripper”, meaning my grip is as close as possible to the tip as I opt for maximum control when writing. This grip is not conducive to that specific style of grip and could potentially be a huge factor in whether the pen is right for you or not. You have to make that decision for yourselves. 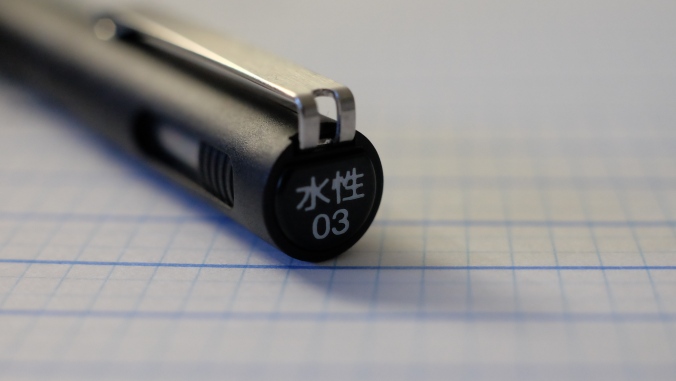 The clip is solid and snaps back with tenacity after being stretched to the limit. I kept the Pin in my pockets many times and every time I may have over-stretched, the clip held up nicely to the abuse.

The cap has a window for which I know no the purpose. It looks really cool, but I question the functionality and necessity a bit.

Overall, a solid choice for a drawing pen. The ink is dark and doesn’t feather too much on normal paper. The barrel design is one of the better ones offered by companies in the product category. While the grip is a bit finicky for those who use the “low-grip” writing style, it can be adjusted too if given enough time. 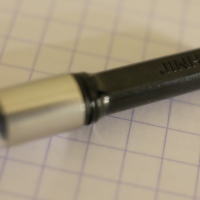