All my friends ask me: Why do you buy such exotic(read: expensive) paper? The answer is simple. When I got into fountain pens, I realized rather quickly that your typical FiveStar or Mead lined paper wouldn’t be good enough. When I say rather quickly, it was specifically after the ink I was using started ghosting and seeping through the page, not to mention the awful feathering. My writing was illegible and resulted in a huge mess on my desk. That was the first step on my journey of finding the best paper for my fountain pens.

Relying on my old and trusty friend Google, I quickly found that there was a rather big forum on paper within FountainPenNetwork. Navigating through the many threads I stumbled upon one that reflected my circumstances perfectly: “Best cheap fountain pen friendly paper for beginners”. Entering and reading the posts I found that they had started an actual poll with Rhodia leading by a wide margin. Returning to Google, I searched for reviews and was not disappointed. Nearly every big stationary blogger I was following at the time had at least one review on Rhodia paper. Excited I went on to the GouletPens website and added a pad of Rhodia to my cart. At the time, I chose to go with the dot grid for reasons outlined in my review. Then I went on to more conventional options like the graph ruling for my math homework. I have been using that same paper for my math homework for the last year now, and it’s still a pleasure to use it to this very day for my Stats homework.

Most of my feelings and observations about this paper can be read in my  linked review, but I just wanted to share how I got into experimenting with fountain pen friendly paper. Overall, I would recommend it to everyone regardless whether they’re just getting started with fountain pens or not. The price is the most reasonable I’ve found among the many options available. Other than the minor trade-off of slightly longer dry times, there isn’t any other flaw I can think of. There’s very minimal ghosting depending on the size of the nib, the rulings are nice and sharp, yet easy on the eyes and the paper is nice and bright, allowing colored inks to pop on the page. 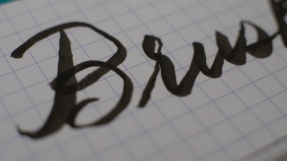 Straight out of the wrapping, the pen seemed too thin for me to use. I had numerous flashbacks about the Marvy LePen as to how uncomfortable it was to use. Surprisingly, in hand, the size was a bit on the slimmer side but comfortable enough for short use. My biggest grip however, is the absolute lack of a grip. The pen is all pretty much one piece of plastic and for some reason, Pilot decided to skimp on the rubber and put little circular grooves near the barrel to substitute for a dedicated grip section. While I wasn’t exactly okay with it, if it had been executed well, I wouldn’t have bothered. The fact that they put the grooves far away from the tip and spaced them out too much, it resulted in an unnecessary addition that did nothing to help the pen stop slipping from my hands. Having naturally sweaty hands, I found myself readjusting my grip every 15 minutes in. This lowered my opinion of the pen overall.

On to the coolest part of the Pilot Frixion, the thermosensitive ink. I initially didn’t realize that this was an erasable pen, I just had it in my wishlist, so I added it to my cart just to try it out. Lo and behold the back intrigued me for a while, until I wised up enough to test whether it was an eraser and indeed it was. I use pens for all my schoolwork for a reason. That reason being a boost in confidence, by laying the ink down on the page, I have unequivocally put down my answer to the question and will not erase again and again in bouts of self-doubt. While it has worked for the most part, it has also led to some frustrating situations. In scenarios where I made stupid mistakes(like writing amounts down wrong), it has been an unnecessarily difficult undertaking of crossing my initial response while replacing it with the correct one. This pen will change all that. It will help me maintain the confidence booster while at the same time allowing me to go back and correct my mistakes neatly. If only it weren’t so unwieldy.

The shape of the eraser is more spherical in nature, keeping the overall design scheme. the whole pen looks like a futuristic rocket. Smooth curves with nary a sharp edge. Why would the eraser be any different? It does a great job of erasing the ink, without leaving the annoying shavings behind relying entirely on friction(get it?) to complete its task.

The knock doubles as a clip, albeit a rather small one. When it was sitting in my Nock Hightower, it was barely holding on. Hence, I found that it was much easier to loop some thread or wire through the hole in the knock and wear it like a necklace.

While the ink is pretty cool and the eraser works wonders, I find it hard to give this pen a good score, as I had a lot of problems with the lack of a grip. It was very unwieldy and I can’t see myself using it often other than the occasional quick jots. However, the best thing this pen has going for it is potential. If Pilot manages to improve some of the design flaws, the Frixion could potentially break into my Top 5 Gel Pen list. Until then, give it a try if you’re looking into erasable pens, but for those with big and/or sweaty hands, this might not be the best choice to start off with. Thanks for reading and as always, write on, my friends.

This is one of two reviews, the next one being posted tomorrow. Thanks for your patience and see you tomorrow. 🙂

A little something I got from my previous JetPens haul. I really wasn’t expecting much in terms of performance, as I know that most Uni-ball pens perform well enough. Little did I know that this one would stand ahead of the pack and shine. 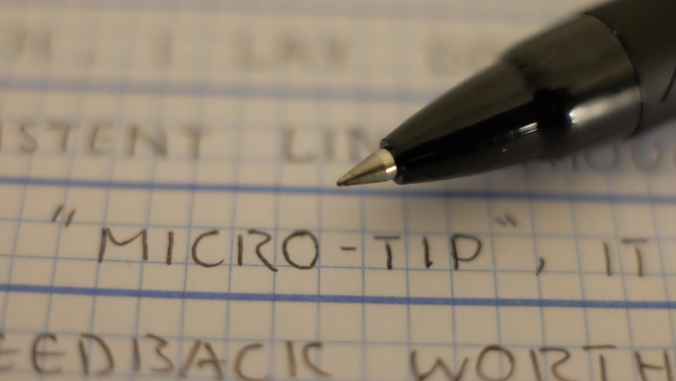 Straight out of the the wrapping, it laid down some thin, yet crisp lines. The most prominent aspect that blew me away was the way the tip just glided across the page. There was almost no feedback on the Doane paper I was using to review it. It was such a pleasure to write with it.

The window in the back is just for show as far as I can tell. It is a unique style choice that I welcome.

The knock on the back is slightly more resistant than some of the pens I’ve used in the past. It takes a little bit of a push to thoroughly depress, resulting in a clear and satisfying click.

I found the grip to be very comfortable despite its looks. While it does thin out in the back, the main part which I place my fingers is well padded. The ridges provide a decent amount of grooves that improve traction. They are made of a softer rubber than some of the other grips I’ve commented on in the past, but they are definitely sturdy enough to withstand a “death grip” should you have one. Even after 4 hour long note-taking sessions, I find my fingers perfectly alright instead of cramping horribly.

Overall, I would really recommend this pen to anyone looking for a durable long-lasting writing instrument that can help against cramps from long writing sessions. Also, anyone who wants to get into “micro-tip” pens can also consider this as a step into that realm. The tip lays down a crisp, consistent line while being slightly thin. Since there is virtually no feedback during usage, it should help ease the transitioning into slightly scratchier pens.

I had to take a break for midterms week. I did well in all of them! 🙂 So I’m coming back and will be putting out 2 reviews instead of the regular one. Maybe I’ll even shoot for 3. I’m just really happy that everything went so well. I apologize to all my loyal readers who didn’t get their weekly review. I know it may have seemed like I finally broke one of my New Year’s resolutions for the blog, but that is not the case. I will make sure to give everyone a heads up next time. Thanks for reading and as always, write on, my friends. 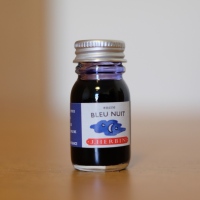 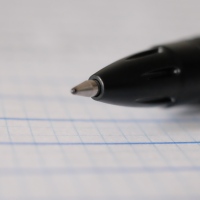